Earlier this year Jim Stone talked about “serve tunnelling” — an idea taken from baseball, wherein pitches follow a similar path for the majority of their trajectory, changing only as they get closer to the hitter. The “tunnel” comes from the analogy that the pitches are travelling through the same narrow tunnel in space. This obviously makes life difficult for the batter trying to anticipate the type of pitch and track the ball.

Serve tunnelling in volleyball would create similar difficulties for the passers. Can we see evidence of this in match footage?

An obvious tool to help with this would be Hawk-Eye, the computer vision system used in major matches to track the ball. While this system isn’t readily accessible to the majority of us, we can obtain a reasonable estimate of the ball track in three dimensions by triangulating its position in two synchronized video streams. While not as precise as commercial systems, it can be done with consumer-grade cameras (phones/tablets) and open-source software.

Let’s look at some serves by Barthélémy Chinenyeze in the match between France and the Netherlands in the men’s 2021 Volleyball Nations League tournament.

Chinenyeze is a float server. In the absence of drag and other aerodynamic effects, we would expect the ball to follow a simple linear horizontal path, with a parabolic trajectory in height. However, the whole point of a float serve is to have the ball deviate unpredictably in flight, so our ball tracking method allows the ball track to deviate from strict linear and parabolic paths while still allowing for measurement error and missing positions (e.g. when the ball goes out of camera view, or is occluded by a player).

We focus here on two pairs of back-to-back serves. The trajectories of all four are shown in the figures below (side view, showing the height of the ball as it travelled from Chinenyeze to the passer):

The first serve (blue) was quite short, with the remaining serves (orange, green, and purple) landing deeper in the court. Despite those length differences, the trajectories are quite similar for at least the first 6m or so. The trajectories of the three deeper serves remain similar for a longer period.

The overhead view of these serves: 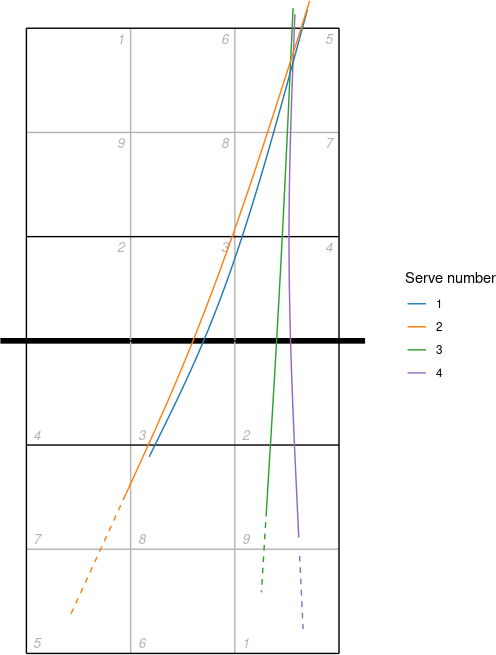 What do these serves look like on video? Each of the clips below shows a pair of serves, first individually and then overlaid on one another with the ball track superimposed.

The first two were to Robbert Andringa (#18). The first (blue line in the figure above) is the short one, which caught Andringa out and he had to make a late forwards lunge. On the second serve (orange, which immediately followed the first one in the actual match) Andringa was perhaps anticipating another short serve, but this one went much deeper and again he was forced to make a late adjustment to his platform.

The second pair of serves was to a different passer: Bennie Tuinstra (#12). Again, these two serves occurred back-to-back in the match. These two were not wildly different in their lengths (the second was about 1m longer than the first), but the overhead view of the ball track suggests a sideways deviation of the second serve towards the sideline. These differences were enough to force Tuinstra to make a late adjustment and pass the second serve from a lateral platform.

Despite his successful disguise of different serves, in this particular match Chinenyeze’s serves were not particularly effective in putting pressure on the passers. His expected breakpoint percentage of 26% was the third-lowest of all servers in the match (compared against players who made at least 10 serve attempts). The match report can be found here.